Pisa Conference – Variation and Contact in the Ancient Indo-European Languages

On 19-20th of April the University of Pisa – which is also my alma mater ­– hosted an international conference entitled Variation and Contact in the Ancient Indo-European Languages: Between Linguistics and Philology. It was the first stage of the two-part colloquia followed by the conference held at St. Hilda’s College, in Oxford, on May 17-18 2018. 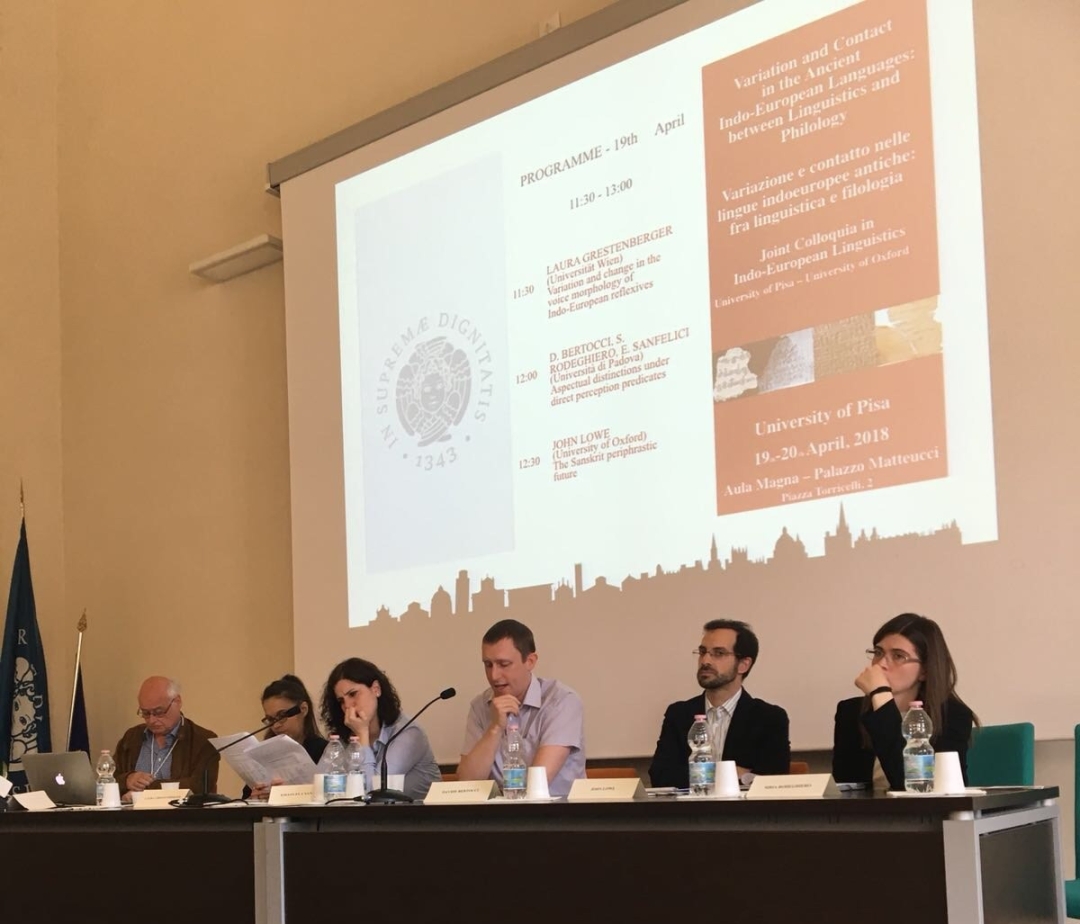 The aim of both of these events was to discuss the nature of contact, variation and change in ancient Indo-European languages by bringing together scholars at any stage of their career to encourage an interdisciplinary dialogue and to provide a special forum to foster new lines of research and collaborative endeavour. The Pisa colloquium featured two dozen speakers. It offered me the opportunity to present our project with a paper: Latinization of the north-western provinces: sociolinguistics, epigraphy and bilingualism. The Germanies.

The conference proved to be an ideal setting for debating the appropriate framework for analysing the nature of the linguistic changes taking place in the Iron Age and Roman period as two, seemingly local Indo-European languages, Germanic and Celtic, both well-attested since the Iron Age, were gradually interacting with and then partially superseded by Latin during a period of change that would see Latin emerge in several respects as the dominant language by the end of the imperial period.  My paper provided an overview of the possible sociolinguistic variables symptomatic of language change in the Germanies and a discussion of their connection to other social phenomena.

My case studies were chosen to study phonological difference from Classical norms as a way of revealing the interaction between Germanic, Celtic and Latin. Among the broad range of inscriptions those featuring personal and deity names are particularly relevant and the diffusion of theonyms can provide insights into the interaction of Roman and local religious traditions.

The first stage of analysis has shown that it is virtually impossible to draw a clear cut linguistic division between Celtic or Germanic languages. Instead I have been creating gradient maps in order to chart Celtic and Germanic features. Crossing-referencing these elements together with the archaeological evidence, it seems that in the Rhineland area, for example, for the most part personal names show a increased level of Celtic features, whereas theonyms often have Germanic features and are linked to Germanic words (e.g. the matres ‘the mother goddesses’, as we have Matronis ALAGABIUS (CIL XIII 8529, Koln) or [Mat]ri BVS SVebis Jethungabus (CIL XIII 8225, Deutz, Köln) or matres Alaferhviae, Alaterviae und Alat(e)ivia from Aachen).

As the project develops I will explore further how linguistic variation and change may, or may not, correlate with local population groups and their histories, and explore further possible local, provincial and imperial interactions.